From its base in Cambridge, southwestern Ontario, Pinnacle Logistics Solutions relies on the Great Lakes region for a substantial portion of its business. But its reach stretches to much of North America and this past summer a joint venture in the Western Arctic added a still wider dimension – quite an achievement for an enterprise with just 16 employees.

“Everything has to do with assembling the right team of experts, from marine to road and rail,” affirmed Aaron Gerber, partner and vice-president of sales, during an interview. “The global pandemic has made it especially important to navigate transportation challenges by thinking outside-of-the-box.”

But he stressed that opportunities are strong in the project cargo sector with governments investing more and more in infrastructure and the energy sector. “Wind and solar energy are proving to be viable technologies on their own.”

He also pointed out that with the life cycle of wind energy components amounting to 20-25 years, a new phase has just begun for replacing the original equipment. “This will be more evident in the next five years.” 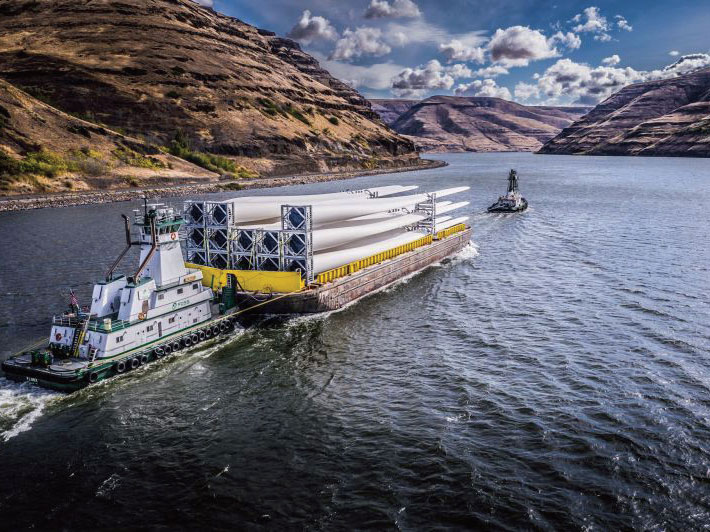 Gerber further singled out the growing interest of Ontario and Quebec of shifting project cargo/breakbulk transport from congested roads to the marine mode.

Among its recent undertakings, Pinnacle chartered a vessel for its client that made possible the transportation of 8,000 metric tons of steel from Bilbao, Spain to the Great Lakes. The shipment transited the Seaway before discharging at the port of Hamilton.

Gerber indicated this served as a case study of the benefits of companies taking control of their supply chain versus suppliers doing so. This notably allows them to avoid paying management costs for another party to control your freight. You don’t want to be the burden of your vendors.”

In another contract, Pinnacle diverted modular units manufactured in western Canada that would normally move by road to water on the Great Lakes/Seaway. A road transportation operation through northern Ontario became a barge solution, with the units moving from west to east, loaded onto barge at Thunder Bay and finally discharged at the Port of Bécancour before delivery by vessel to the Arctic.

This past February, Pinnacle completed a major wind energy transportation project for the delivery of Asia-sourced wind turbine components, including 43 towers, to Fort MacLeod, Alberta. It involved transporting over one thousand loads within a three-month window which started in October 2020.

The outbreak of COVID-19 caused production delays in Asia and significant disruption to the project scheduling. And when the parts began to arrive at the Port of Vancouver, WA, the pandemic had sparked labour conflicts and additional scheduling delays with other conflicts. Instead of trying to move the cargoes entirely overland, Pinnacle took the decision to barge towers and blades east on the Columbia and Snake rivers into Idaho before trucking them north into Canada.

Thus, trimming more than 600 miles off the trip with the barging solution reportedly saved Pinnacle’s clients millions of dollars.

Meanwhile, it was as a direct example of its commitment to the development of Indigenous peoples within Canada through partnerships that Pinnacle established in August a joint venture with the Acho Dene Koe First Nation (ADKFN), whose traditional territory spans three jurisdictions: Northwest Territories, where many reside in the Hamlet of Fort Liard, Northern British Columbia and the South-eastern Yukon Territory. The name of the newly formed entity is known as Acho Pinnacle Logistics Ltd.

Recognized for its continuous growth and development across a number of industries, ADK Holdings Ltd., the economic arm of ADKFN, boasts a growing portfolio of subsidiaries, partnerships and joint ventures – with interests in oil and gas development, construction, camps and catering, drilling, energy transmission, real estate, crane services, aviation and now transportation logistics.

While Pinnacle and ADK look forward to working together very soon on their first project, the relationship Pinnacle has cultivated with ADK represents more than just work. Pinnacle also believes it has a role to play when it comes to both inclusion and training within the indigenous communities it partners with.

“Diversification within our partnerships and supplier base is paramount to the work we do,” commented Pinnacle’s Gord McNeil, who manages business development. “We’re also focused on skills development and training within these communities. The aim is to inspire individuals through practical skills training within the transportation and logistics space.”